The Benefits of Having a Traffic Door in Your Bifold 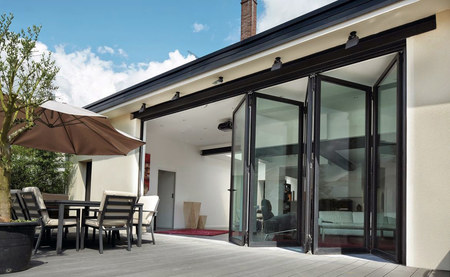 Bifold doors offer a great many benefits, but there are a couple of possible drawbacks:

All isn't lost, though. That's where traffic doors come in.

What Are Traffic Doors?

A traffic door is, essentially, a conventional door built into a bifold door system. It opens separately from the bifold, so it can be used for access between inside and outside without having to open the whole set. It has a lever handle and its own locking mechanism, so it can be opened equally from inside or outside.

Why Have a Traffic Door?

In hot, summer weather, there's nothing better than having bifold doors flung open and stacked neatly out of the way. It lets fresh air into the house and allows you to wander in and out with no division between the two spaces.

When there's a chill in the air, though, the advantage of bifold doors is the great view they give you of your garden while their double glazing keeps you warm and comfortable inside. The last thing you want is to have to open the whole set and freeze everyone in order to go out.

It's important that external bifold doors lock on the inside, otherwise they could be a weak point in the house's security. This can make it awkward, though, if you want access from outside.

In both cases, a traffic door allows you to have the best of both worlds.

Do You Always Need a Traffic Door?

Traffic doors aren't essential for all external bifold doors. For instance, if you have a kitchen door opening straight into the garden, as well as the bifold doors, that might be adequate for access when the patio doors are closed.

In many cases, though, a traffic door will enhance your experience of your bifold doors. Check out to find out what options are available for traffic doors in aluminium, timber and uPVC bifold doors.

You may also wish to read...

Design your bifold door and get an instant quote